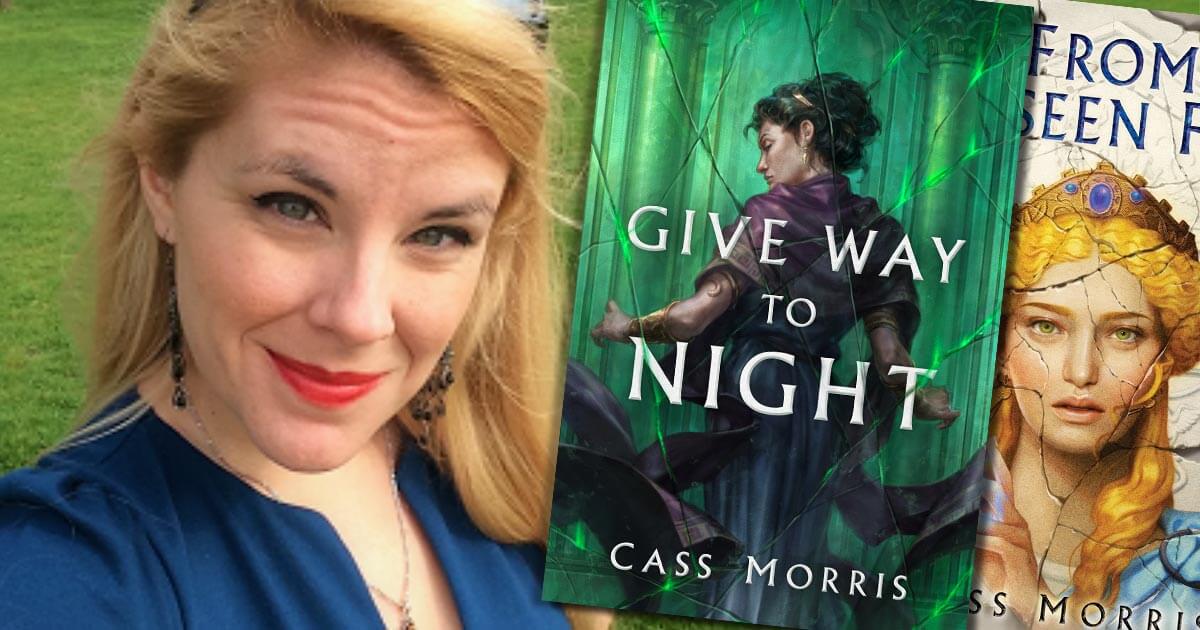 Cinema Mode Subscribe
TwitterFacebookRedditEmail
FROM UNSEEN FIRE author Cass Morris talks about its sequel, GIVE WAY TO NIGHT, the 2nd book in the AVEN CYCLE. We discuss her creative process for the Ancient Rome-inspired fantasy, the trouble with prophecies, and handling a large cast.

In this episode I’m talking with Cass Morris, author of GIVE WAY TO NIGHT, the sequel to the historically-inspired fantasy FROM UNSEEN FIRE.

This series, called the AVEN CYCLE, explores a Roman-esque empire filled with divine and elemental magics, dangerous political machinations, and rising war between cultures and territories. Several years of harsh dictatorship have unbalanced the powerful city of Aven. But now, the Dictator is dead, and the resulting power vacuum draws in the late-ruler’s allies and enemies to struggle for control of the Republic.

Latona of the Vitelliae is a mage of Spirit and Fire, married off to a minor, indifferent noble to keep her life and talents free of notice. But with the dictator finally gone, Latona and her canny, gifted siblings can throw off the objections of society to seize a greater destiny for their people.

Sempronius Tarren is an exiled but ambitious senator seeking influence in Aven. But in a political system that refuses office to those who possess magical talent, he hides a dangerous secret—a blessing from the gods that shows him shadows of possible futures.

Conjoined by politics, complicated by romance, Latona and Sempronius must work together to protect the Republic. But can cunning wit and divine magic stand strong against foes that wield brutal violence and wicked sorcery?

GIVE WAY TO NIGHT is the 2nd novel in the AVEN CYCLE series, and is available December 29th from DAW Books:

FROM UNSEEN FIRE is available now:

» Some of these links are affiliate links. Whenever possible, I *strongly* encourage you to look for and purchase these books from your local & independent bookstores. That said, I earn a small commission if you click to and buy a product. That supports the channel and helps me out, at no additional cost to you! Use your best judgment and purchase wisely.

Mentioned in this Video

Cass Morris works as an educator in central Virginia and as a bookseller on the Outer Banks of North Carolina. She holds a Master of Letters from Mary Baldwin University and a BA in English with a minor in history from the College of William and Mary. She reads voraciously, wears corsets voluntarily, and will beat you at MarioKart.

About GIVE WAY TO NIGHT

The second book of the Aven Cycle explores a magical Rome-inspired empire, where senators, generals, and elemental mages vie for power.

Latona of the Vitelliae, mage of Spirit and Fire, is eager to wield her newfound empowerment on behalf of the citizens of Aven–but societal forces conspire to keep her from exercising her gifts, even when the resurgence of a banished cult plots the city’s ruin. To combat this threat, Latona must ally with Fracture mage Vibia, the distrustful sister of Sempronius Tarren.

While Latona struggles to defend their home, Sempronius leads soldiers through wartorn provinces to lift the siege of Toletum, where Latona’s brother Gaius is hemmed in by supernatural forces. Sempronius must contend not only with the war-king Ekialde and his sorcerers, but with the machinations of political rivals and the temptations of his own soul, ever-susceptible to the darker side of ambition.

Though separated by many miles soon after their love affair began, Latona and Sempronius are united by passion as they strive to protect Aven and build its glorious future.