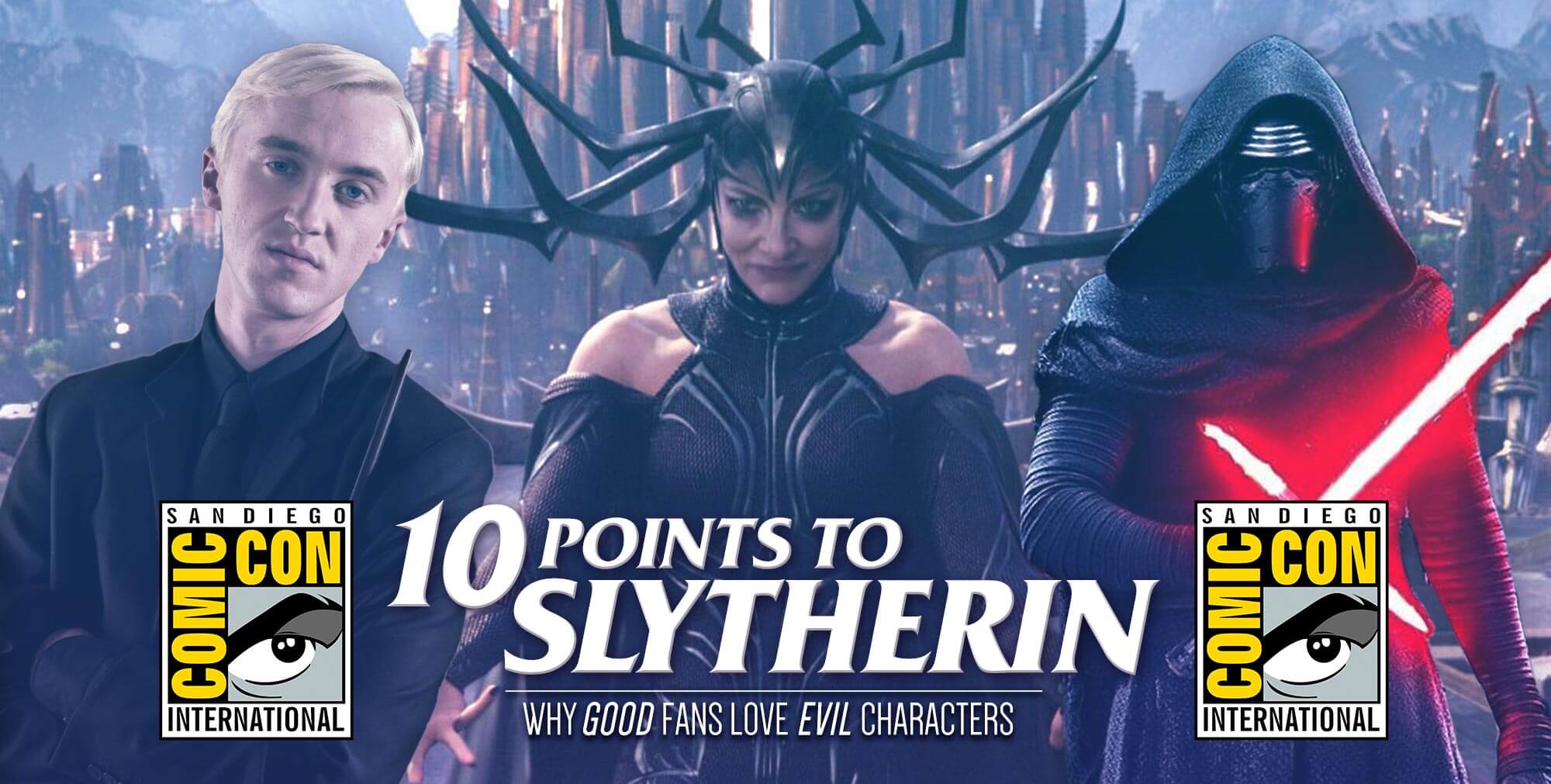 Fictitious podcast host Adron Buske is excited to return to San Diego for the 2019 Comic-Con International. This year, Adron will be moderating two panels, including our signature Fictitious panel, “10 Points to Slytherin: Why Good Fans Love Evil Characters”. The panel features some outstanding authors and writers. Full details below!

Adron will also be moderating “Care and Nurturing of Someone Else’s Universe” on Thursday, July 18th. More info on that here.

Get in touch with your Dark Side! Forget the boring heroes – fandom loves its villains. Loki, Harley Quinn, Darth Vader, The Joker – with their fascinating backstories, dangerous aesthetics, and devil-may-care attitudes, it’s easy to see why many fans identify with the bad guys. But what does it say about you when you proudly claim allegiance to Slytherin House, the 501st, or Hydra?

Fictitious Podcast host, Adron Buske, and a group of writers and creators will explore fan fascination with fictional antagonists. Featuring:

Add this panel to your official SDCC schedule via Sched.

Marissa Meyer is the #1 New York Times–bestselling author of  The Renegades Trilogy, which concludes with Supernova this November. She is also the author of The Lunar Chronicles series and Heartless. She lives in Tacoma, Washington, with her husband and their two daughters.

Renée Ahdieh is the author of Flame in the Mist and Smoke in the Sun as well as the #1 New York Times bestselling The Wrath and the Dawn and its sequel, The Rose and the Dagger. She lives in Charlotte, North Carolina, with her husband and their tiny overlord of a dog.

Keto Shimizu was accepted into NBC’s “Writers on the Verge” in 2009, and shortly thereafter was staffed on NBC’s The Cape. She moved on to SyFy’s Being Human where she spent two seasons.  She was then brought on to CW’s Arrow, and after three years writing for the DC comic adaptation she transferred to the spinoff Legends of Tomorrow where she is currently a writer and Executive Producer.

Caitlin Starling is a writer and spreadsheet-wrangler who lives near Portland, Oregon. She writes horror-tinged speculative fiction of all flavors. Her first novel, The Luminous Dead, is out now from Harper Voyager. Caitlin is also embarking into the world of narrative design for interactive theater and games, and is always on the lookout for new ways to inflict insomnia.

Shaun Barger is a Los Angeles-based novelist who detests cold weather, idiot plotting, and fascism. He splits his days between writing, resisting the siren’s call of Hollywood’s eternally mild summer climes, and appeasing a tyrannical three-pound Chihuahua with peanut butter and apple slices. Mage Against The Machine is his first novel.

Adron Buske is the host of the Fictitious podcast. He is a frequent speaker at pop culture conventions, events, and universities around the country, discussing storytelling, careers in genre entertainment, and ways to power-up your life using ideas from gaming & fiction.

Adron Buske is a speaker, writer, interviewer, and multimedia storyteller. A media professional since 2001, he spent 11 years in the radio industry as a digital creative director and, later, a corporate executive. He has worn many creative hats: video production director, graphic designer, web developer, fashion photographer, performing musician, gaming festival organizer, comic creator, and voice talent. He is a frequent speaker at pop culture conventions around the country, presenting seminars about entertainment careers, the craft of storytelling, and ways to power-up your life using concepts from gaming and fiction.

That’s a wrap on Season 3 of Fictitious! I’ll be taking a short summer break to travel and work on a few projects. Fictitious will return on Monday, July 22nd […]