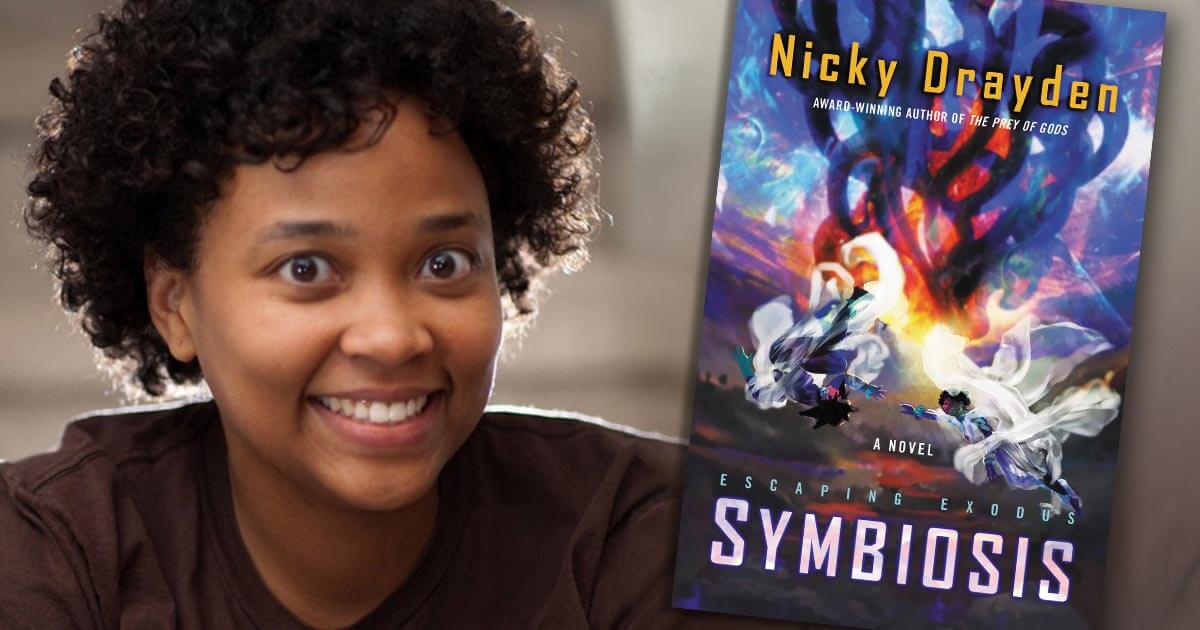 In this episode, I’m joined by Nicky Drayden, author of ESCAPING EXODUS, and its new sequel, SYMBIOSIS. This sci-fi duology explores a human civilization built entirely inside colossal, space-faring beasts.

The impetuous young Seska Kayleigh is a child of privilege and heir to the matriarchal throne of her people. As their recently relocated colony carves out a new city from the guts of their living host, Seska teeters between duty and scandal, engaging in romance with a girl from a lower caste.

Sturdy beastworker Adalla would spend her days laboring in the very heart of the beast, a dangerous and important job. But she’s also Seska’s best friend. The young women’s burgeoning romance threatens both their social standings and their lives in the strict and cruel hierarchy of their society.

When their ill-advised adventures uncover alarming secrets about the nature of their home, Seska and Adalla find themselves caught up in political machinations, family double-crosses, and lower caste uprisings. Can their love survive revolution and their own selfish choices? And how will their revelations reshape their world?

Nicky Drayden is a Systems Analyst who dabbles in prose when she’s not buried in code. She resides in Austin, Texas where being weird is highly encouraged, if not required. Her award-winning novel THE PREY OF GODS is set in a futuristic South Africa brimming with demigods, robots, and hallucinogenic hijinks, and with her new novel ESCAPING EXODUS, she’ll be taking her weirdness off-world to a civilization living inside the gut of moon-sized space beast.

Earth is a distant memory. Habitable extrasolar planets are still out of reach. For generations, humanity has been clinging to survival by establishing colonies within enormous vacuum-breathing space beasts and mining their resources to the point of depletion.

Rash, dreamy, and unconventional, Seske Kaleigh should be preparing for her future role as clan leader, but her people have just culled their latest beast, and she’s eager to find the cause of the violent tremors plaguing their new home. Defying social barriers, Seske teams up with her best friend, a beast worker, and ventures into restricted areas for answers to end the mounting fear and rumors. Instead, they discover grim truths about the price of life in the void.

Then, Seske is unexpectedly thrust into the role of clan matriarch, responsible for thousands of lives in a harsh universe where a single mistake can be fatal. Her claim to the throne is challenged by a rival determined to overthrow her and take control—her intelligent, cunning, and confident sister.

Seske may not be a born leader like her sister, yet her unorthodox outlook and incorruptible idealism may be what the clan needs to save themselves and their world.

Nearly a thousand years removed from Earth, the remnants of humanity cling to existence inside giant, space faring creatures known as the Zenzee. Abused and exploited by humans for generations, these majestic animals nearly went extinct, but under the command of its newly minted ruler, Doka Kaleigh, life in the Parados I has flourished. Thanks to careful oversight and sacrifice by all of its crew, they are now on the brink of utopia, and yet Doka’s rivals feel threatened by that success.

The Senate allowed Doka to lead their people believing he’d fail spectacularly—a disaster that would cement the legitimacy of their long-standing matriarchy. Despite vocal opposition and blatant attacks on his authority, Doka has continued to handle his position with grace and intelligence; he knows a single misstep means disaster. When a cataclysmic event on another Zenzee world forces Doka and his people to accept thousands of refugees, a culture clash erupts, revealing secrets from the past that could endanger their future. For Doka, the stakes are bigger and more personal than ever before—and could cost him his reign and his heart.

He has fallen for the one woman he is forbidden to love: his wife, Seske.

Doka and Seske must work closely together to sway the other Zenzee worlds to stop their cycles of destruction. But when they stumble upon a discovery that can transform their world, they know they must prepare to fight a battle where there can be no winners, only survivors.