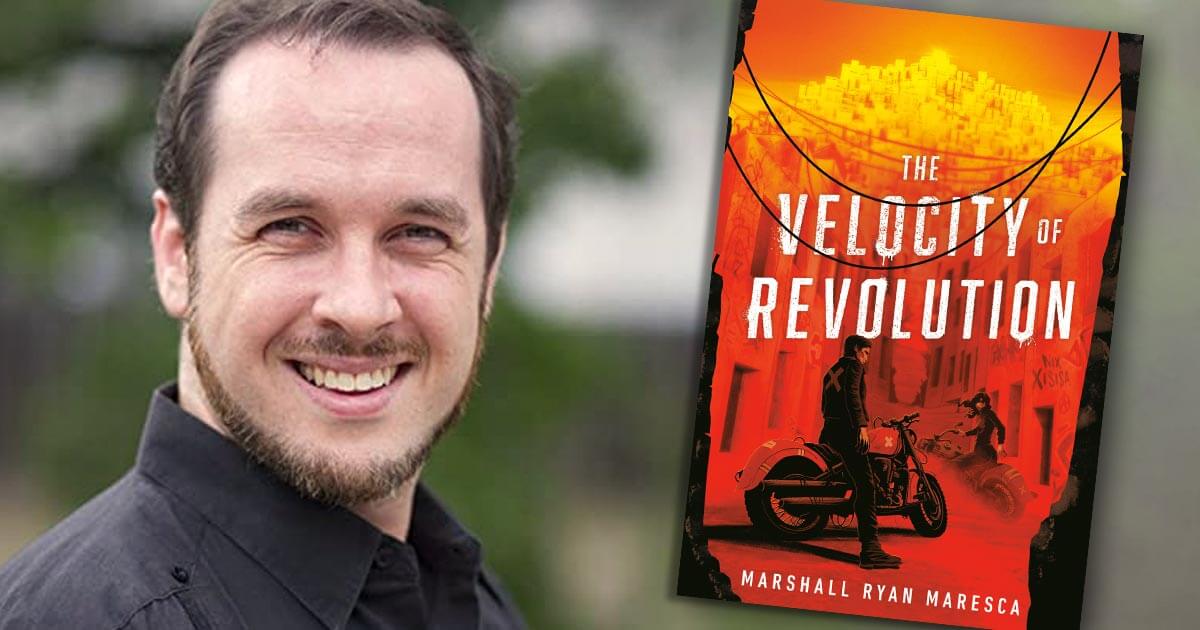 In this episode I’m joined by Marshall Ryan Maresca, author of THE VELOCITY OF REVOLUTION. This dieselpunk fantasy novel follows Wenthi, a loyal patrol officer and talented cycle rider, who is sent undercover to infiltrate revolutionary biker gangs.

The vibrant city of Ziaparr stands at a crossroads — recovering from long years of warfare and reclaiming a place in the world and its nations. But it’s dominated by a rigid caste system that elevates some ethnic groups to power and privilege, and drives others into slums and poverty. Insurgent gangs, connected by a mysterious voice on the radio, mount their bikes to attack the status quo.

When the city patrol takes a rebel captive, Nália, they discover the gangs are using a street drug to magically connect their minds and sense their pursuers.  Wenthi’s mission requires that he use the drug to connect with Nália, to use her knowledge to gain the trust of the rebellion.

But this deep connection with intensifies with every high speed ride. Nália haunts his mind even as he becomes closer to the band of revolutionaries he’s honor-bound to betray. Wenthi must choose between two paths—between his sworn duty, and the true justice being denied. The wrong turn could put him and his city on a collision course with disaster.

THE VELOCITY OF REVOLUTION is high octane fantasy that is available now from DAW Books:

Marshall Ryan Maresca is a fantasy and science-fiction writer, author of the Maradaine Saga: four braided series set amid the bustling streets and crime-ridden districts of the exotic city called Maradaine, which includes The Thorn of Dentonhill, A Murder of Mages, The Holver Alley Crew, and The Way of the Shield. He is also the author of The Velocity of Revolution, and has been a playwright, an actor, a delivery driver, and an amateur chef.

About THE VELOCITY OF REVOLUTION

Ziaparr: a city being rebuilt after years of mechanized and magical warfare, the capital of a ravaged nation on the verge of renewal and self-rule. But unrest foments as undercaste cycle gangs raid supply trucks, agitate the populace and vandalize the city. A revolution is brewing in the slums and shantytowns against the occupying government, led by a voice on the radio, connected through forbidden magic.

Wenthi Tungét, a talented cycle rider and a loyal officer in the city patrol, is assigned to infiltrate the cycle gangs. For his mission against the insurgents, Wenthi must use their magic, connecting his mind to Nália, a recently captured rebel, using her knowledge to find his way into the heart of the rebellion.

Wenthi’s skill on a cycle makes him valuable to the resistance cell he joins, but he discovers that the magic enhances with speed. Every ride intensifies his connection, drawing him closer to the gang he must betray, and strengthens Nália’s presence as she haunts his mind.

Wenthi is torn between justice and duty, and the wrong choice will light a spark in a city on the verge of combustion.