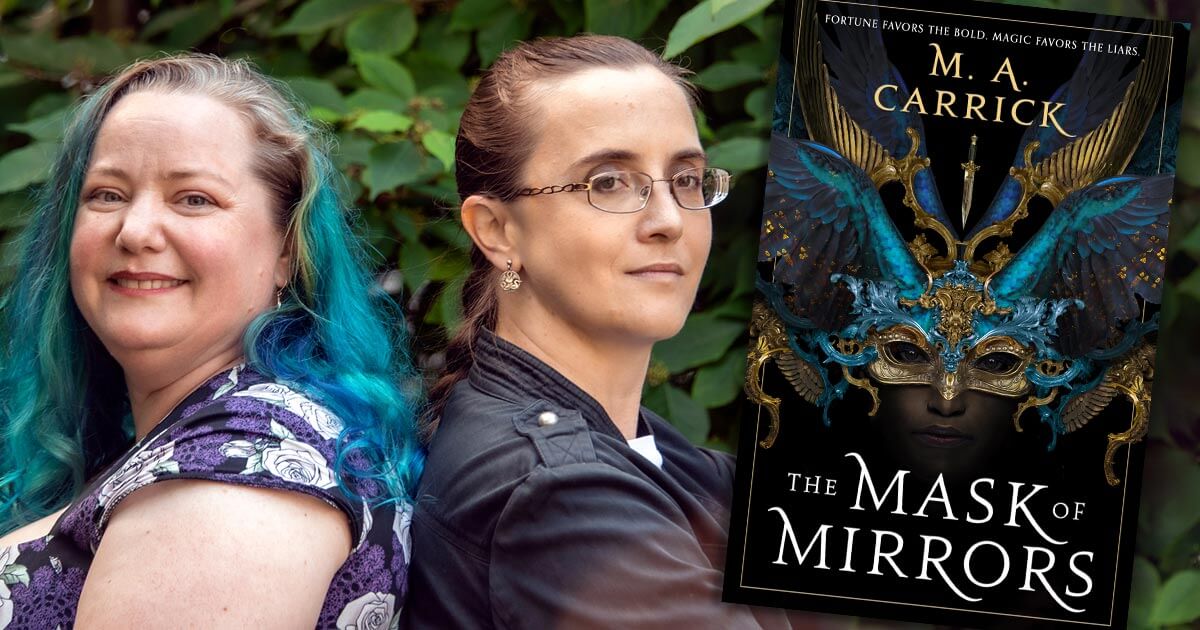 Cinema Mode Subscribe
TwitterFacebookRedditEmail
THE MASK OF MIRRORS author M.A. Carrick—co-writing team Marie Brennan & Alyc Helms—talk about their twisty, intricate Fantasy novel. We explore their collaboration creative process, the impact of their anthropology backgrounds on the world-building, and their setting's casual queerness.

I’m joined in this episode by THE MASK OF MIRRORS author M.A. Carrick, which is a pseudonym for the co-writing team of Marie Brennan and Alyc Helms.

The first book in the ROSE & ROOK fantasy trilogy, THE MASK OF MIRRORS follows Ren, a girl who forcibly escapes the slums of Nadezra to save herself and her sister from life in an abusive gang. She later returns to Nadezra, though, under a new identity, and with a new goal: Con her way into the most vulnerable noble house and amass her own personal fortune.

But Ren soon learns that her marks are playing plenty of games of their own. Some may win her affection, while others weave layers of deceit. Figuring out who to trust becomes crucial as Ren finds herself caught up in aristocratic feuds and social upheaval, between virtuous lawmen and charming crime lords, and in the company of a mysterious vigilante. All while nightmarish magical corruption threatens this, the city of dreams, and all of Ren’s carefully laid plans.

It will take all her talents and cunning to ward off destruction—because, in Nedezra, fortune favors the bold, but magic favors the liars.

THE MASK OF MIRRORS is an intricate fantasy novel, published by Orbit Books and available now:

Mentioned in This Video

M.A. Carrick is the joint pen name of Marie Brennan (author of the Memoirs of Lady Trent) and Alyc Helms (author of the Adventures of Mr. Mystic). The two met in 2000 on an archaeological dig in Wales and Ireland — including a stint in the town of Carrickmacross — and have built their friendship through two decades of anthropology, writing, and gaming. They live in the San Francisco Bay Area.

About THE MASK OF MIRRORS

The Mask of Mirrors is the unmissable start to the Rook & Rose trilogy, a darkly magical fantasy adventure in which a con artist returns to the city that betrayed her, determined to have her revenge—only to find that her fate might be to save it.

This is your past, the good and the ill of it, and that which is neither . . .
Arenza Lenskaya is a liar and a thief, a pattern-reader and a daughter of no clan. Raised in the slums of Nadezra, she fled that world to save her sister.

This is your present, the good and the ill of it, and that which is neither . . .
Renata Viraudax is a con artist recently arrived in Nadezra. She has one goal: to trick her way into a noble house and secure her fortune.

This is your future, the good and the ill of it, and that which is neither . . .
As corrupt nightmare magic begins to weave its way through the city of dreams, the poisonous feuds of its aristocrats and the shadowy dangers of its impoverished underbelly become tangled—with Ren at their heart. And if she cannot sort the truth from the lies, it will mean the destruction of all her worlds.