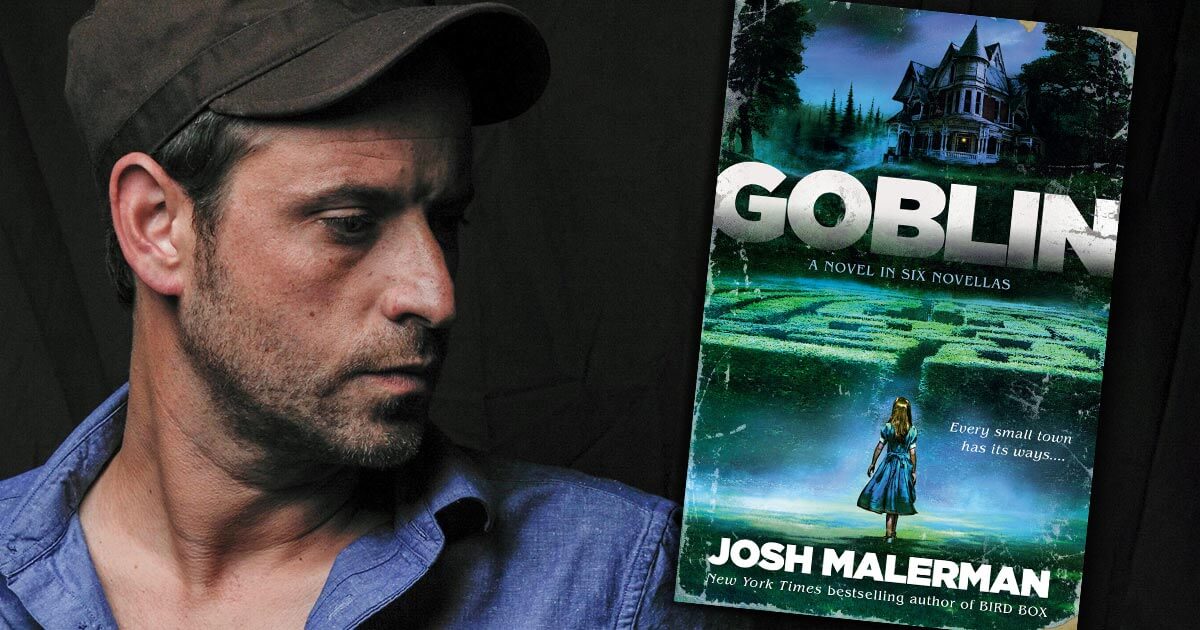 Cinema Mode Subscribe
TwitterFacebookRedditEmail
Josh Malerman (author of BIRD BOX) talks about his book GOBLIN, a dark fantasy novel comprised of 6 individual but connected novellas. We discuss his prolific writing process, finding the rhythm for a story, exploring themes of obsession, and making a city the main character of his novel.

In this episode I’m joined by Josh Malerman, author of GOBLIN. This uniquely design supernatural horror novel weaves 6 separate novellas together, each tale examining curious characters and disturbing circumstances in the isolated town of Goblin.

In a city built on cursed land, the dead are buried standing up, Great Owls occupy the dangerous north woods, and the police shuffle unnervingly through the constant deluge of rain.

Here in Goblin, a historian builds his life around fear of being scared to death. A troubling confession from a childhood friend leaves a man fearful and compromised. A little girl endeavors to solve an impossible maze created by a grieving husband after the death of his wife.

These stories and more explore the secrets and bizarre history of a town unlike any other, where nighttime is always near, and your darkest desires and fears await.

GOBLIN is available in hardcover from Del Rey Books:

Josh Malerman is a New York Times bestselling author and one of two singer-songwriters for the rock
band The High Strung. His debut novel, Bird Box, is the inspiration for the hit Netflix film of the same
name. His other novels include Unbury Carol, Inspection, A House at the Bottom of a Lake, and Malorie, the
sequel to Bird Box. Malerman lives in Michigan with his fiancée, the artist-musician Allison Laakko.

From the New York Times bestselling author of Bird Box and Malorie comes a chilling story that revolves around a mysterious small town, revealing its sinister secrets one by one.

Goblin seems like any other ordinary small town. But with the master storyteller Josh Malerman as your tour guide, you’ll discover the secrets that hide behind its closed doors. These six novellas tell the story of a place where the rain is always falling, nighttime is always near, and your darkest fears and desires await. Welcome to Goblin. . . .

A Man in Slices: A man proves his “legendary love” to his girlfriend with a sacrifice even more daring than Vincent van Gogh’s—and sends her more than his heart.

Kamp: Walter Kamp is afraid of everything, but most afraid of being scared to death. As he sets traps around his home to catch the ghosts that haunt him, he learns that nothing is more terrifying than fear itself.

Happy Birthday, Hunter!: A famed big-game hunter is determined to capture—and kill—the ultimate prey: the mythic Great Owl who lives in Goblin’s dark forests. But this mysterious creature is not the only secret the woods are keeping.

Presto: All Peter wants is to be like his hero, Roman Emperor, the greatest magician in the world. When the famous magician comes to Goblin, Peter discovers that not all magic is just an illusion.

A Mix-Up at the Zoo: The new zookeeper feels a mysterious kinship with the animals in his care . . . and finds that his work is freeing dark forces inside him.

The Hedges: When his wife dies, a man builds a hedge maze so elaborate no one ever solves it—until a little girl resolves to be the first to find the mysteries that wait at its heart.