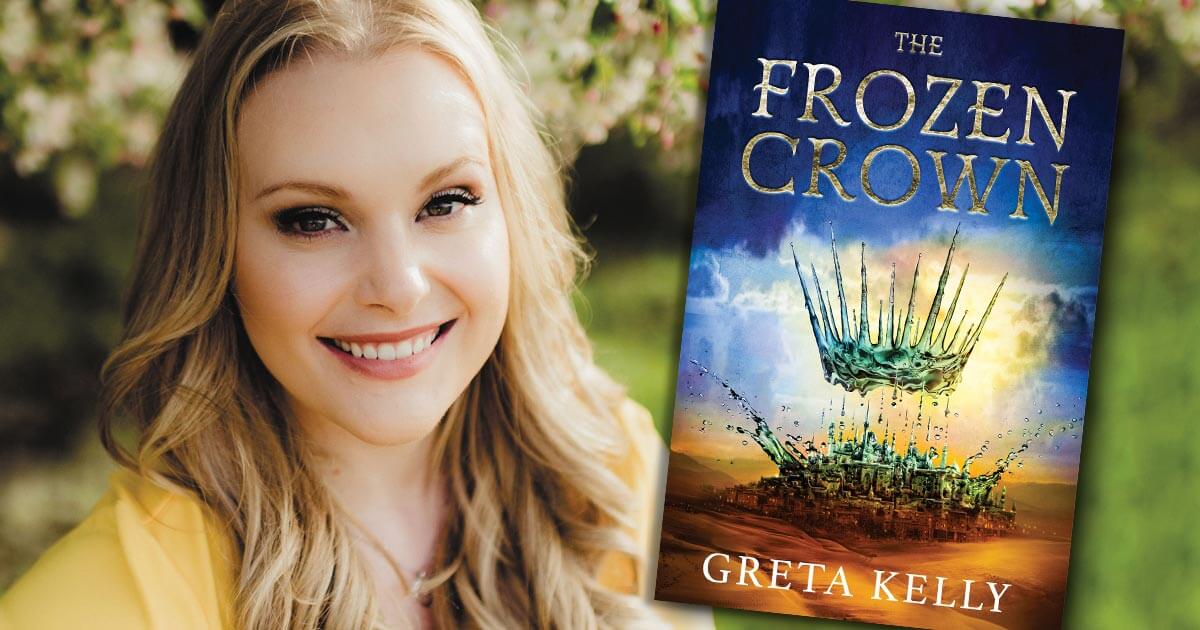 In this episode, I’m talking with Greta Kelly, author of the debut fantasy novel, THE FROZEN CROWN. Violently displaced from the wild beauty of her homeland by a ruthless conqueror, the young princess Askia seeks support from a neighboring nation to the south. But in sun-soaked Vishir, where nobles live lavishly while refugees starve, Askia finds herself a blunt object amongst a court of delicate manners and fragile alliances.

The princess urgently needs Vishir’s armies to intervene before her country burns. Yet first she must navigate a court that harbors too many enemies, including a vindictive royal son, the hateful mouthpiece for her northern aggressor, and the religious zealots who murdered her parents.

Her allies complicate matters, too. A friendly prince whose attentions invite scandal. Her loyal captain whose devotion barely overshadows his longing. An enigmatic Queen who may be mentor or manipulator. And the ghost of her best friend—an apparition only she can see, because Askia carries her own carefully guarded secret. She is a witch, in a world where magic can be a powerful tool—or a death sentence.

As every advancing day threatens the annihilation of her army, Askia will face an impossible choice. But will any sacrifice be enough to satisfy two opposing emperors and save her people?

THE FROZEN CROWN is the first novel in a duology, available January 12th from Harper Voyager:

» Some of these links are affiliate links. Whenever possible, I strongly encourage you to look for and purchase these books from your local & independent bookstores. That said, I earn a small commission if you click to and buy a product. That supports the channel and helps me out, at no additional cost to you! Use your best judgment and purchase wisely.

Greta K. Kelly is (probably) not a witch, death or otherwise, but she can still be summoned with offerings of too-beautiful-to-use journals and Butterfingers candy. She currently lives in Wisconsin with her husband EJ, daughter Lorelei and a cat who may, or may not, control the weather.

ABOUT “THE FROZEN CROWN”

A princess with a powerful and dangerous secret must find a way to save her country from ruthless invaders in this exciting debut fantasy, the first novel in a thrilling duology packed with heroism, treachery, magic, and war.

Askia became heir to the Frozen Crown of Seravesh because of her devotion to her people. But her realm is facing a threat she cannot defeat by sheer will alone. The mad emperor of the Roven Empire has unleashed a horde of invading soldiers to enslave her lands. For months, her warriors have waged a valiant, stealth battle, yet they cannot stop the enemy’s advancement. Running out of time, she sets sail for sun-drenched Vishir, the neighboring land to the south, to seek help from its ruler, Emperor Armaan.

A young woman raised in army camps, Askia is ill-equipped to navigate Vishir’s labyrinthine political games. Her every move sinks her deeper into court intrigues which bewilder and repel her, leaving her vulnerable not only to enemies gathering at Vishir’s gates, but to those behind the palace walls.

And in this glittering court, where secrets are worth more than gold, Askia fears that one false step will expose her true nature. For Askia is a witch gifted with magical abilities—knowledge that could destroy not only her life but her people. As her adversaries draw closer, Askia is forced to make an impossible choice—and no matter what she decides, it may not be enough to prevent Seravesh’s fall.