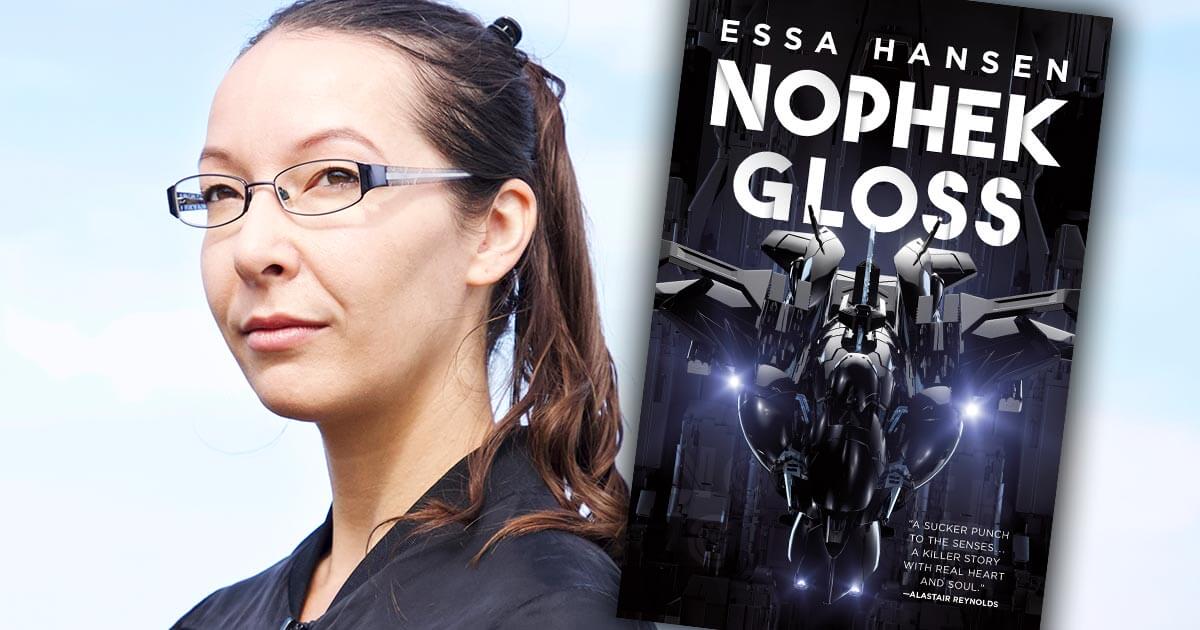 Cinema Mode Subscribe
TwitterFacebookRedditEmail
NOPHEK GLOSS author Essa Hansen discusses writing her debut science fiction novel, how she approached her sci-fi universe's elaborate world-building, and the influence of her work as a movie sound designer on her storytelling.

In this episode, I’m talking with Essa Hansen, author of NOPHEK GLOSS. This debut science fiction adventure follows Caiden, a teenage mechanic who discovers his simple but highly regimented life is actually one of servitude on a hidden slave planet.

When his entire colony is sent to slaughter, Caiden alone survives, fleeing the vicious creatures who devoured his people. After taking refuge in a strange, abandoned vessel, he is saved from capture by a band of explorers, and whisked off planet—with only trauma and rage as mementos of his previous existence.

Among the stars, he discovers a multiverse of strange lifeforms, alien cultures, and unfathomably powerful foes. Torn by grief and guilt, accompanied by a quarrelsome found family, and in possession of a dangerously unique ship, Caiden wrestles with his own mysterious origins while facing a singular question:

How can one boy take revenge on a vast, evil interstellar political entity?

NOPHEK GLOSS is an ambitious and imaginative space opera novel that arrives November 17th from Orbit Books. Available wherever books are sold:

Resources Mentioned in this Episode

Essa Hansen grew up in beautifully wild areas of California, from the coastal foothills to the Sierra Nevada mountains around Yosemite, before migrating north to the Canadian Rocky Mountains. She has ranched bison and sheep, trained horses, practiced Japanese swordsmanship, and is a licensed falconer. She attended the Vancouver Film School and works as a sound designer for SF and fantasy feature films.

“A sucker punch to the senses…a killer story with real heart and soul.”–Alastair Reynolds

When a young man’s planet is destroyed, he sets out on a single-minded quest for revenge across the galaxy in Nophek Gloss, the first book in this epic space opera trilogy debut — perfect for fans of Revenger and Children of Time.

Caiden’s planet is destroyed. His family gone. And, his only hope for survival is a crew of misfit aliens and a mysterious ship that seems to have a soul and a universe of its own. Together they will show him that the universe is much bigger, much more advanced, and much more mysterious than Caiden had ever imagined. But the universe hides dangers as well, and soon Caiden has his own plans.

He vows to do anything it takes to get revenge on the slavers who murdered his people and took away his home. To destroy their regime, he must infiltrate and dismantle them from the inside, or die trying.

* Some of these links are affiliate links. Whenever possible, I strongly encourage you to look for and purchase these books from your local & independent bookstores. That said, I earn a small commission if you click to and buy a product. That supports the channel and helps me out, at no additional cost to you! Use your best judgment and purchase wisely.