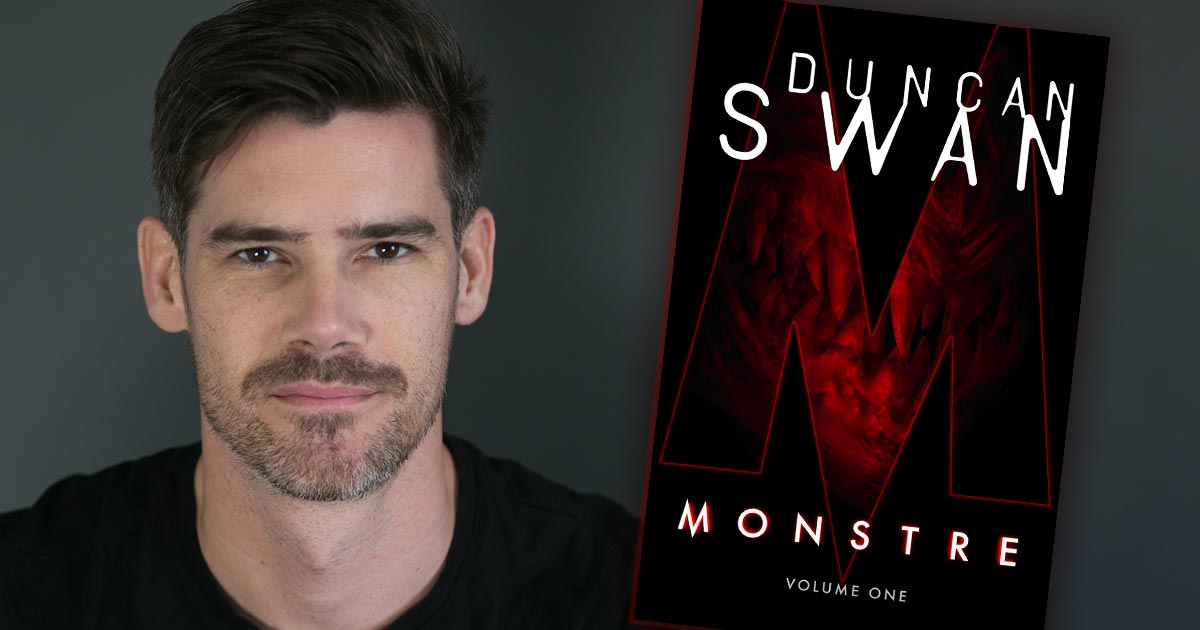 I’m joined in this episode by Duncan Swan, author of MONSTRE VOLUME ONE. In this genre-blending sci-fi thriller, a catastrophic event at a research installation unleashes a slowly advancing worldwide apocalypse. A squad of marines are sent on a desperate mission into The Cloud, a dark wave of devastation swallowing Europe, looking for answers where only monsters may remain.

89 days later, the Cloud has reached the United States, sending Americans into a spiral of madness. An aging lawman, a conflicted ex-con, and others search for hope of survival as society collapses, chasing rumors of an old nuclear bunker and running from certain death.

We watch these narratives unfold in parallel in a story that weaves modern science, military action, dystopian dread, and visceral horror.

MONSTRE VOLUME ONE is Kickstarter crowd-funding success and is available at Amazon and Bookshop now:

South African born and raised, Kiwi immigrant, Australian citizen, and now a U.S. Permanent Resident, Duncan Swan holds a degree in Aerospace Engineering and a Master of Commerce. He originally wanted to be an astronaut, but somehow wound up working in finance as a portfolio analyst and making fancy spreadsheets. Now, he lives in Los Angeles with his wife and daughter and tells stories, working with amazing artists, editors, publishers, and marketing geniuses to create something new.

Duncan’s debut novel, MONSTRE – a story about survival and mad desperation, described as “sci-fi with teeth” – will be released in two parts. The first volume is available now in paperback, ebook, and audiobook formats, and Volume 2 will follow in Summer 2021.

About MONSTRE VOLUME ONE

Day 0. From the wreckage of a research facility in Switzerland, a plume of toxic smoke and ash pours into the sky, forming an impenetrable cloud that is slowly smothering the world in darkness. As Europe disappears beneath the Cloud, a squad of United States Marines are sent on a desperate mission to find out what went wrong, and how to undo it before it’s too late. Venturing into a cold, dark world, the Marines must travel deep under the Cloud, with no comms, no backup, and no idea of what they will face.

Day 89. Half a world away, the Cloud has reached the East Coast of the U.S. With nowhere to run and no hope of survival, the American people have descended into madness, turning on themselves and each other. From the sidelines, an old Tennessee sheriff watches as his country unravels. But he can’t bring himself to take the easy way out. Quitting isn’t in his DNA. So when one of his deputies asks him to help protect her family, he leads them west, chasing a miracle—a rumor of an old nuclear bunker that just may be their only hope for survival.

Because if the Cloud doesn’t kill them, what’s hiding in the dark will.

* Some of these links are affiliate links. Whenever possible, I strongly encourage you to look for and purchase these books from your local & independent bookstores. That said, I earn a small commission if you click to and buy a product. That supports the channel and helps me out, at no additional cost to you! Use your best judgment and purchase wisely.