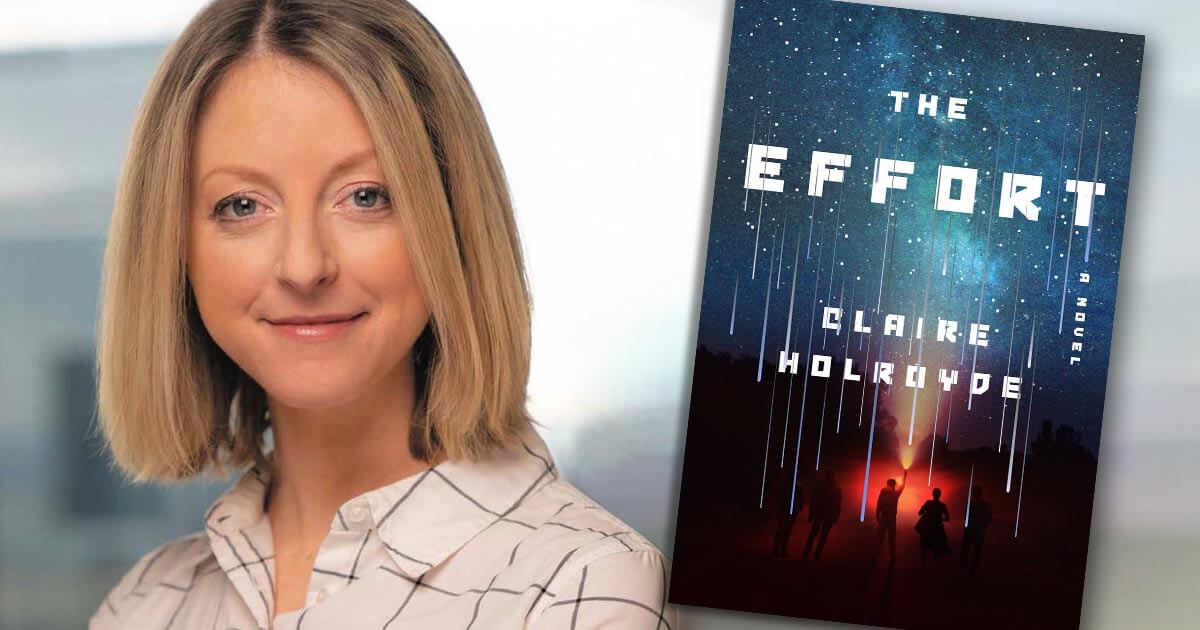 Cinema Mode Subscribe
TwitterFacebookRedditEmail
THE EFFORT author Claire Holroyde discusses her present-day sci-fi novel about an extinction level event, and the people trying to save Earth. We talk about balancing a large cast, using real science without bogging down the reader, and tackling real world problems in a fictional narrative.

I’m joined in this episode by Claire Holroyde, author of THE EFFORT. In this spec-fic / sci-fi novel, the Earth is threatened by an extinction level event when an 8 kilometer “dark” comet emerges from behind the sun on a rapid collision course with our planet.

Immediately after discovery of the comet, an international coalition of scientists is assembled and nicknamed The Effort. Under the leadership of NASA’s Dr. Benjamin Schwartz—a specialist who has spent years modeling impact scenarios—The Effort are tasked with nothing less than assuring the survival of humanity. But their mission, which would require years of preparation under any reasonable circumstances, has only months before the insane velocity of the comet brings it within range.

At Ben’s side are the most powerful minds in space travel and nuclear science, supported by his tech recruiter girlfriend Amy Kowalski, the brilliant poly-lingual Kenyan interpreter Love Mwangi, and the might of the United Nations.

Against them are political power structures unwilling to commit resources, global chaos erupting as the world population faces the reality of extinction, and the ticking countdown of precious time slipping away.

Near the north pole, a Coast Guard ship full of climate scientists investigates the withering ice and dying animal life. Cut off from land and family, photojournalist Jack and marine biologist Maya stoke the flickering sparks of romance amid a suffocating, existential despair. And in New York City, Love’s girlfriend Rivka struggles to survive in a city falling to violence and starvation.

THE EFFORT is apocalyptic fiction focused on truly human stories, how we survive together or die divided, protecting the disappearing beauty of our fragile world, or succumbing to annihilation. It’s available now from Grand Central Publishing:

Claire Holroyde is a writer, graphic designer, and storyteller living in the Philadelphia metro area.

For readers of Station Eleven and Good Morning, Midnight comes an electric, heart-pounding novel of love and sacrifice that follows people around the world as they unite to prevent a global catastrophe.

When dark comet UD3 was spotted near Jupiter’s orbit, its existence was largely ignored. But to individuals who knew better — scientists like Benjamin Schwartz, manager of NASA’s Center for Near-Earth Object Studies — the threat this eight-kilometer comet posed to the survival of the human race was unthinkable. The 150-million-year reign of the dinosaurs ended when an asteroid impact generated more than a billiontimes the energy of an atomic bomb.

What would happen to Earth’s seven billion inhabitants if a similar event were allowed to occur?

Ben and his indomitable girlfriend Amy Kowalski fly to South America to assemble an international counteraction team, whose notable recruits include Love Mwangi, a UN interpreter and nomad scholar, and Zhen Liu, an extraordinary engineer from China’s national space agency. At the same time, on board a polar icebreaker life continues under the looming shadow of comet UD3. Jack Campbell, a photographer for National Geographic, works to capture the beauty of the Arctic before it is gone forever. Gustavo Wayãpi, a Nobel Laureate poet from Brazil, struggles to accept the recent murder of his beloved twin brother. And Maya Gutiérrez, an impassioned marine biologist is — quite unexpectedly — falling in love for the first time.

Together, these men and women must fight to survive in an unknown future with no rules and nothing to be taken for granted. They have two choices: neutralize the greatest threat the world has ever seen (preferably before mass hysteria hits or world leaders declare World War III) or come to terms with the annihilation of humanity itself.

Their mission is codenamed The Effort.