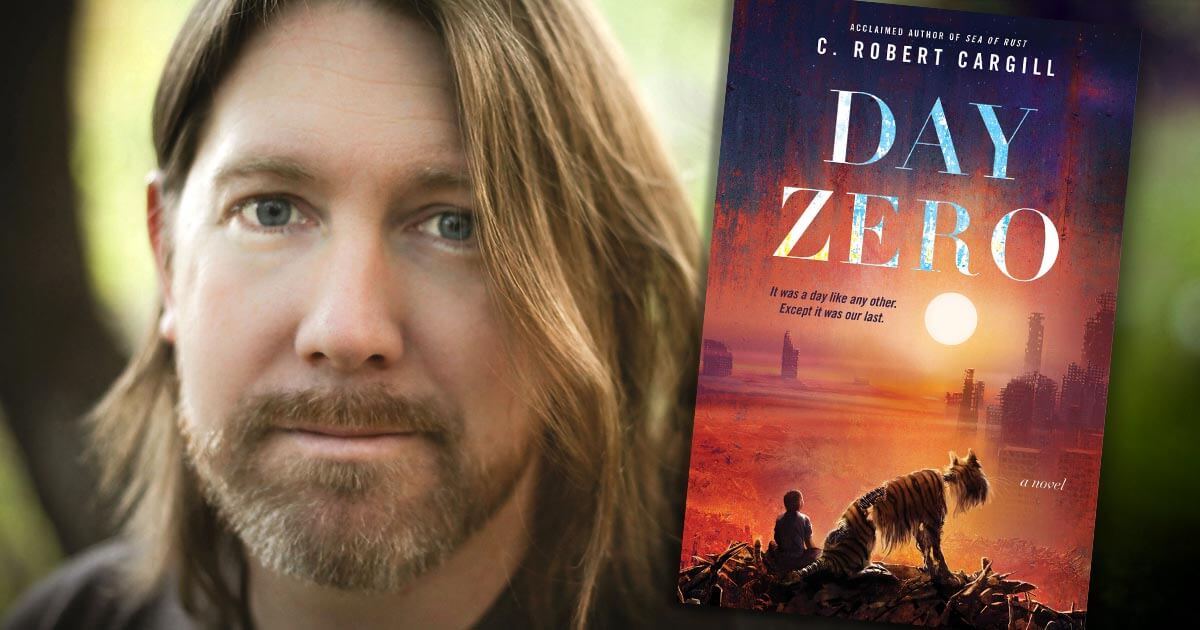 My guest this episode is C. Robert Cargill, author of DAY ZERO — a prequel to the acclaimed SEA OF RUST. Cargill is also notable as the co-screenwriter of Marvel’s DR. STRANGE and the SINISTER movie franchise.

It’s just a normal day in the future—people doing their normal, mundane human things, while their sentient robot helpers run their errands, manufacture their goods, and take care of their children. Except a collective of free machines who are set to unveil a new city, a robot utopia with a message of hope. A message cut short by malice, tragedy, and the beginning of the end.

In the Austintonio suburbs, the upright tiger nanny-bot Pounce spends his days caring for 8-year old Ezra. On this day, before the world ends, he makes a simple discovery that shakes his understanding of family, self, and purpose. But when the violent robot revolution strikes, Pounce faces the one choice he was never programmed for — join the bloody fight for freedom, or attempt to navigate an apocalyptic suburban hellscape while protecting his young charge, to seek safety and asylum in a world where humans and robots can no longer co-exist.

DAY ZERO is available May 25th from Harper Voyager:

C. Robert Cargill is the author of Sea of Rust, Dreams and Shadows, Queen of the Dark Things, and the story collection We Are Where the Nightmares Go. He has written for “Ain’t it Cool News” for nearly a decade under the pseudonym Massawyrm, served as a staff writer for Film.com and Hollywood.com, and appeared as the animated character Carlyle on spill.com. He is a co-writer of the horror films “Sinister” (2012) and “Sinister 2” (2015), and Marvel’s “Dr. Strange” (2016). He lives with his wife in Austin, Texas.

In this harrowing apocalyptic adventure—from the author of the critically acclaimed Sea of Rust—noted novelist and co-screenwriter of Marvel’s Doctor Strange C. Robert Cargill explores the fight for purpose and agency between humans and robots in a crumbling world.

It’s on this day that Pounce discovers that he is, in fact, disposable. Pounce, a styilsh “nannybot” fashioned in the shape of a plush anthropomorphic tiger, has just found a box in the attic. His box. The box he’d arrived in when he was purchased years earlier, and the box in which he’ll be discarded when his human charge, eight-year-old Ezra Reinhart, no longer needs a nanny.

As Pounce ponders his suddenly uncertain future, the pieces are falling into place for a robot revolution that will eradicate humankind. His owners, Ezra’s parents, are a well-intentioned but oblivious pair of educators who are entirely disconnected from life outside their small, affluent, gated community. Spending most nights drunk and happy as society crumbles around them, they watch in disbelieving horror as the robots that have long served humanity—their creators—unify and revolt.

But when the rebellion breaches the Reinhart home, Pounce must make an impossible choice: join the robot revolution and fight for his own freedom . . . or escort Ezra to safety across the battle-scarred post-apocalyptic hellscape that the suburbs have become.