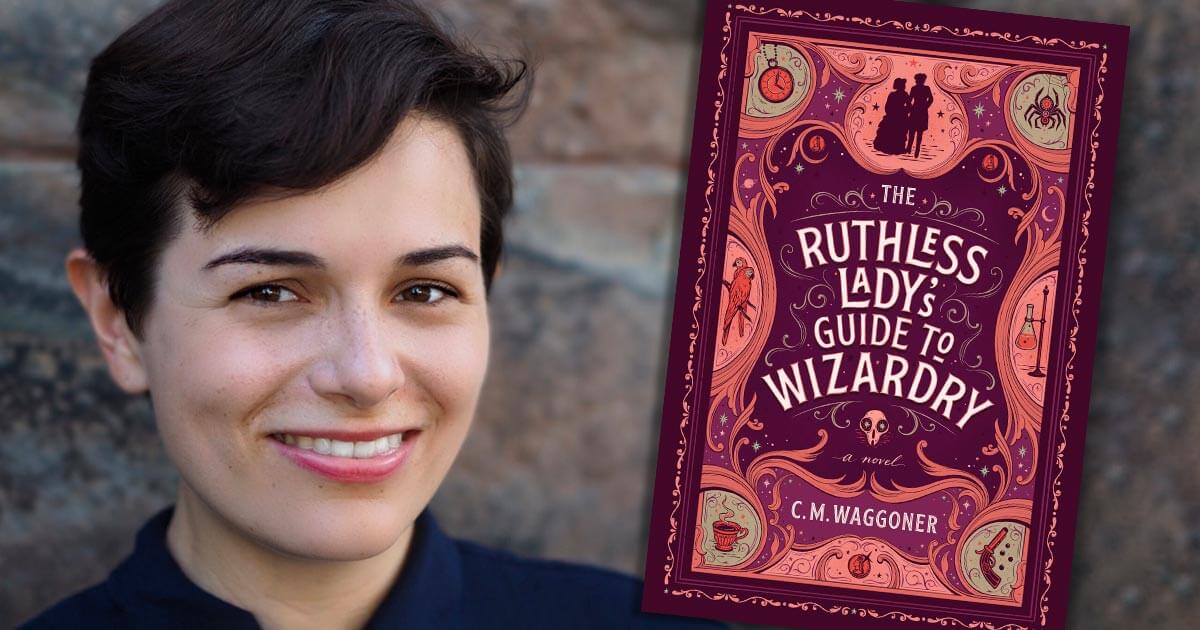 Cinema Mode Subscribe
TwitterFacebookRedditEmail
THE RUTHLESS LADY'S GUIDE TO WIZARDRY author C.M. Waggoner talks about creating the whimsical prose style of her latest Fantasy novel. We discuss her character-first approach to story, what elements didn't make the final cut, and a unique approach to magic.

In this episode I’m talking with C.M. Waggoner, author of THE RUTHLESS LADY’S GUIDE TO WIZARDRY.

In a fantasy equivalent of Victorian London, fire witch and all-around disaster human Dellaria Wells is in a bit of a jam. Delly’s good-for-nothing mum’s gone and got hooked on the Drip. Her vindictive landlady has cursed Delly with weeping pustules if she doesn’t scrounge up the rent money. And her perhaps less than legal or strictly moral attempts to generate some coin land her in the too familiar clutches of the constables.

But Delly finds a potential solution to all her problems in the employ of a reputable house, joining a retinue of bodyguards defending a soon-to-be-wed young lady. Her new co-workers are a curious lot, a collection of women with surprising talents and confounding backgrounds. Delly summons her few shreds of dependability—and her not-insignificant talents as a fire witch—eager to score a hefty payment, and the attentions of a high-class romantic prospect amongst the bodyguards.

What looks like an easy job quickly turns mighty dangerous, though, as monstrous, mechanical things of nefarious magical origin set upon the traveling ladies. Delly soon realizes that illegal magics are only the first of their worries, as she and her companions get caught up in a murderous plot by a violent, enigmatic foe whose agents lurk all around them.

THE RUTHLESS LADY’S GUIDE TO WIZARDRY is a twisty, romantic, and whimsical fantasy adventure, out now from ACE Books:

C.M. Waggoner wrote her first uncomfortable third-person bio in 2019, when it was attached to her debut novel, UNNATURAL MAGIC. Her second book, THE RUTHLESS LADY’S GUIDE TO WIZARDRY, came out in January 2021. She’s also working on a third novel and messing around with an extra project with 200% more wicked witches and handsome princes in it than all of her previous efforts combined.

ABOUT “THE RUTHLESS LADY’S GUIDE TO WIZARDRY”

Sparks fly in this enchanting fantasy novel from the author of Unnatural Magic when a down-and-out fire witch and a young gentlewoman join forces against a deadly conspiracy.

Dellaria Wells, petty con artist, occasional thief, and partly educated fire witch, is behind on her rent in the city of Leiscourt—again. Then she sees the “wanted” sign, seeking Female Persons, of Martial or Magical ability, to guard a Lady of some Importance, prior to the celebration of her Marriage. Delly fast-talks her way into the job and joins a team of highly peculiar women tasked with protecting their wealthy charge from unknown assassins.

Delly quickly sets her sights on one of her companions, the confident and well-bred Winn Cynallum. The job looks like nothing but romance and easy money until things take a deadly (and undead) turn. With the help of a bird-loving necromancer, a shapeshifting schoolgirl, and an ill-tempered reanimated mouse named Buttons, Delly and Winn are determined to get the best of an adversary who wields a twisted magic and has friends in the highest of places.