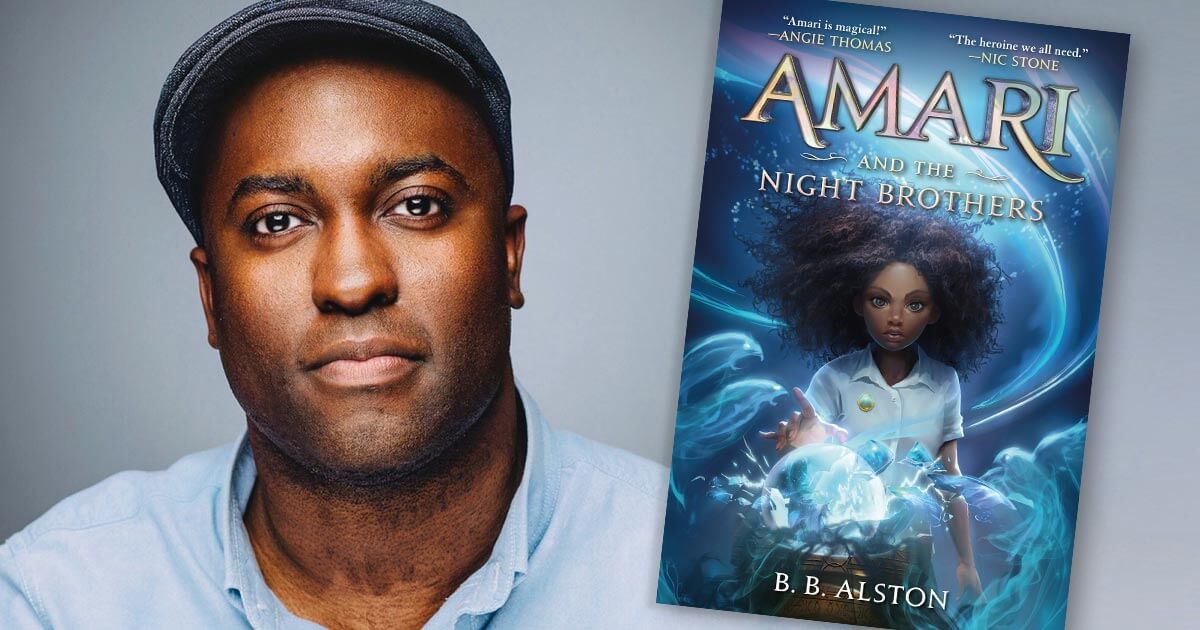 In this episode I’m talking with B.B. Alston, author of AMARI AND THE NIGHT BROTHERS.

Amari is a 13-year old girl from the projects, attending a private school on scholarship. Her academic career sits in the shadow of her genius brother, Quinton, who graduated top of his class and fielded Ivy League offers. But after taking a mysterious job offer, Quinton has gone missing. His disappearance hangs heavily on Amari’s shoulders.

When an altercation with elitist bullies costs Amari her scholarship, she and her over-worked nurse mother face a long summer trying to figure out how to pay for school. But everything changes when Amari receives a highly unusual, for-her-eyes-only delivery. The briefcase from her brother contains several eye-opening surprises, including a nomination for something called the Bureau of Supernatural Affairs.

Amari discovers a hidden world around her—of magicians and monsters, faeries and aliens, marvelous machines and devious dangers—managed and defended by the Bureau. As a young recruit, she’ll meet friends and make enemies among kids who’ve known magic their entire lives. And, if fitting in wasn’t already hard enough, she soon discovers her own magical talent is quite illegal.

Surrounded by adversaries in a supernatural world under threat of a powerful evil force, the challenges are overwhelming. But if Amari doesn’t succeed in the Bureau’s tryouts, she may never find out what happened to her beloved brother.

AMARI AND THE NIGHT BROTHERS is a middle grade fantasy novel, available January 19th from Balzer + Bray, an imprint of HarperCollins:

B.B. Alston started writing in middle school, entertaining his classmates with horror stories starring the whole class where not everyone survived! After several years of trying to break into publishing, he had just been accepted into a biomedical graduate program when a chance entry into a twitter pitch contest led to his signing with TBA, 20+ book deals worldwide, and even a film deal. When not writing, he can be found eating too many sweets and exploring country roads to see where they lead.

B.B. was inspired to write AMARI AND THE NIGHT BROTHERS because he couldn’t find any fantasy stories featuring Black kids when he was growing up. He hopes to show kids that though you might look different, or feel  different, whatever the reason, your uniqueness needn’t only be a source of fear and insecurity. There is great strength and joy to be found in simply accepting yourself for who you are. Because once you do so, you’ll be unstoppable.

About AMARI AND THE NIGHT BROTHERS

Amari Peters has never stopped believing her missing brother, Quinton, is alive. Not even when the police told her otherwise, or when she got in trouble for standing up to bullies who said he was gone for good.

So when she finds a ticking briefcase in his closet, containing a nomination for a summer tryout at the Bureau of Supernatural Affairs, she’s certain the secretive organization holds the key to locating Quinton—if only she can wrap her head around the idea of magicians, fairies, aliens, and other supernatural creatures all being real.

Now she must compete for a spot against kids who’ve known about magic their whole lives. No matter how hard she tries, Amari can’t seem to escape their intense doubt and scrutiny—especially once her supernaturally enhanced talent is deemed “illegal.”

With an evil magician threatening the supernatural world, and her own classmates thinking she’s an enemy, Amari has never felt more alone. But if she doesn’t stick it out and pass the tryouts, she may never find out what happened to Quinton.