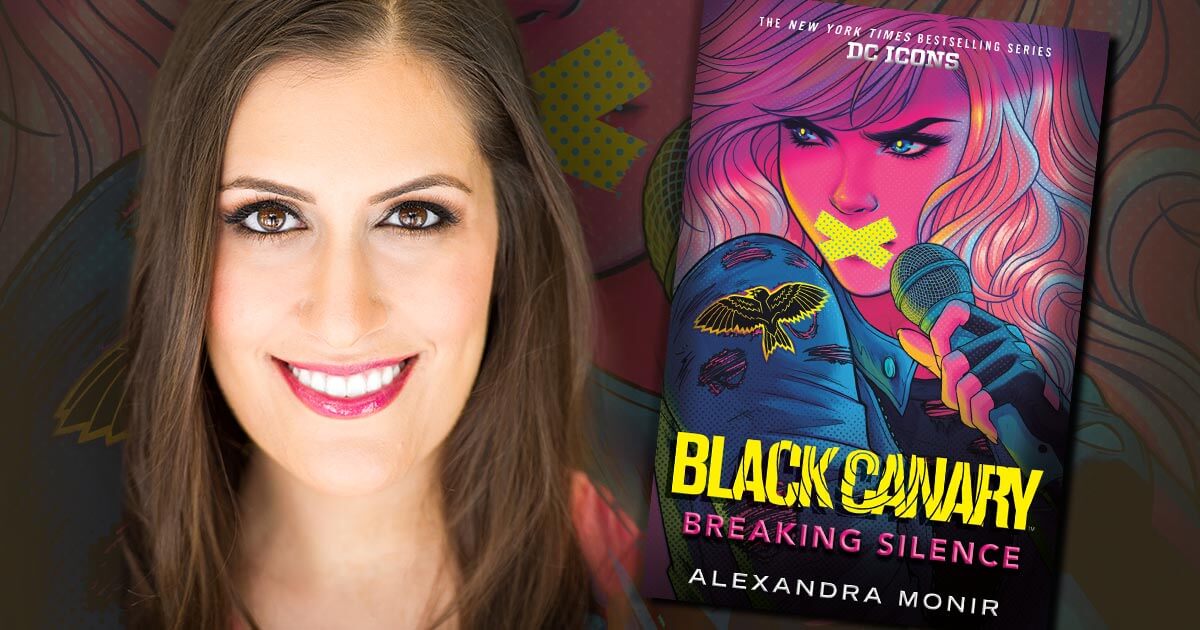 Cinema Mode Subscribe
TwitterFacebookRedditEmail
BLACK CANARY: BREAKING SILENCE author Alexandra Monir talks about writing for the DC Icons young adult series, adapting the fan-favorite Black Canary and Court of Owls in a prose novel, and how she got the job of writing a major media tie-in.

Decades ago, Gotham and its vigilante heroes fell to a violent shadow organization called the Court of Owls. The Court has reshaped the city in their patriarchal image, setting up a cruel and vindictive autocracy. Dissenters are punished by superhuman enforcers called Talons. And women in particular have been subjugated—not just with the removal of rights and freedoms, but by having their abilities of music and singing artificially stifled.

Seventeen year old Dinah is fortunate to have been educated by her parents about life before the Owls took over. A childhood experience—hearing the forbidden, beautiful, impossible sound of a woman singing—drives Dinah to seek out truths the Owls have buried. Yet to resist the autocratic regime could land her, her friends, and her police officer father in Arkham Asylum—or in the morgue.

Dinah must find a way to unleash the incredible power of her own voice to combat the Court of Owls. And perhaps she can find an ally in her school’s new transfer student, a mysterious senior named Oliver Queen.

BLACK CANARY: BREAKING SILENCE is the 5th standalone novel in the DC ICONS series, and is available December 29th from Random House Books for Young Readers:

» Some of these links are affiliate links. Whenever possible, I *strongly* encourage you to look for and purchase these books from your local & independent bookstores. That said, I earn a small commission if you click to and buy a product. That supports the channel and helps me out, at no additional cost to you! Use your best judgment and purchase wisely.

Mentioned in This Video

“SAVE THE CAT WRITES A NOVEL” by Jessica Brody

Alexandra Monir, Iranian-American author and recording artist, has published five novels for young adults, including her popular debut, TIMELESS. A Barnes & Noble best-seller and one of Amazon’s “Best Books of the Month,” TIMELESS and its sequel, TIMEKEEPER, have been featured in numerous media outlets and been published in different countries around the world. She followed the duology with SUSPICION and THE GIRL IN THE PICTURE, both standalone YA thrillers. Her new science fiction novel, THE FINAL SIX was acquired by HarperCollins and Sony Pictures during the same week, in two major pre-emptive deals.

Alexandra is also a singer/songwriter who often integrates music into her books’ pages. She wrote and recorded three original songs to accompany TIMELESS and TIMEKEEPER, which were released as the album “The Timeless EP” and distributed by Jimmy Buffett’s record label, Mailboat Records. She also recorded a song that was released with the publication of SUSPICION and is composing a stage musical geared toward Broadway. Her musical roots are deep, as she is the granddaughter of the late Monir Vakili, the foremost Iranian opera singer.

Alexandra Monir is a frequent speaker at middle schools and high schools across the country, and at major events including fan conventions, women’s leadership conferences, and book festivals. She currently lives in Los Angeles with her husband and newborn son.

In this thrilling origin story of Black Canary, Dinah Lance’s voice is her weapon. And in a near-future world where women have no rights, she won’t hesitate to use everything she has–including her song–to fight back.

Dinah Lance was eight years old when she overheard the impossible: the sound of a girl singing. It was something she was never meant to hear–not in her lifetime and not in Gotham City, taken over by the vicious, patriarchal Court of Owls. The sinister organization rules Gotham City as a dictatorship and has stripped women of everything–their right to work, to make music, to learn, to be free.

Now seventeen, Dinah can’t forget that haunting sound, and she’s beginning to discover that her own voice is just as powerful. But singing is forbidden–a one-way route to a certain death sentence. Fighting to balance her father’s desire to keep her safe, a blossoming romance with mysterious new student Oliver Queen, and her own need to help other women and girls rise up, Dinah wonders if her song will finally be heard. And will her voice be powerful enough to destroy the Court of Owls once and for all?